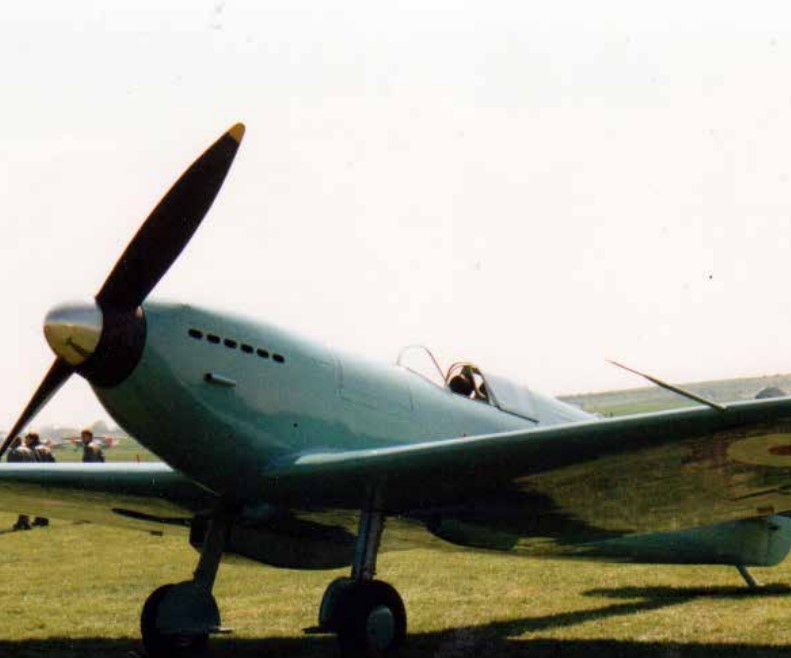 How many people today realise that this iconic aircraft, with a name that sounds like defiance and victory was originally slated to be called ‘Shrew’ or ‘Shrike’.

Fortunately, the chairman of Vickers Aviation had decided that something more warlike was required. It is rumoured that his daughter inspired the name. “She’s a little spitfire” he is meant to have said. Others have suggested that the name Spitfire itself added to its potency as a weapon and that without such an evocative name we could have lost the war.

Almost cancelled at birth
Consideration was given to cancelling the project early on in favour of a Gloster design due to fears that Supermarine, a manufacturer of seaplanes, had insufficient capacity to build aircraft in the large numbers required. Gloster and companies like Hawker were still caught up in wood and fabric methods of aircraft building, whereas Supermarine had experience of high-speed metal monoplanes in their successful Schneider Trophy racing aircraft designs.

The brief included all-metal construction with good visibility for the pilot, a top speed of 195mph and the ability to carry four .303 machine guns.

When the brief arrived on R.J. Mitchell’s desk, work started straight away. The tender document was back with the Air Ministry just over a hundred days later. From the companies that submitted designs, three were awarded contracts, including Supermarine’s new design which showed the highest performance potential of all. Trials proved disappointing, after whichSupermarine pursued their own vision of what a next generation fighter should be like, principally with eight guns, a much greater top speed and an enclosed cockpit.

I don’t want anything touched
The prototype K5054 was flown for the first time on 5th March 1936, the test pilot Mutt Summers famously saying “I don’t want anything touched” after landing. The jury is out as to what he meant by this. Some say that he was declaring the aeroplane perfect, others say that he wanted the aeroplane left as it was so that it provided a benchmark for subsequent flights.

After the first flight, a variable pitch propeller was fitted to allow exploration of the aeroplane’s performance and the undercarriage was unlocked. It had been prevented from retraction on its maiden flight for safety reasons. Eight.303 Browning machine guns were also fitted to the wings.

Cutting edge development with peas
Trials followed, including a unique experiment, involving a bag of split peas. K5054 had been built with all flush rivets on the outer skins, but these were time consuming to use in production. The solution was to glue split peas on the rivet heads to simulate dome-headed rivets which were quicker to use. By removing the peas from various areas of skin and conducting tests, the optimum balance was found, giving the best performance but with the minimum time required to build each Spitfire.

In 1937, performance was given a further enhancement with the addition of a triple ejector exhaust on each side of the aeroplane. This modification alone produced 70lbs of propulsive thrust, boosting the top speed to 360mph.

From the initial flights onwards, the prototype was gradually developed and modified until it basically represented the MKI that would go into production.

Finally, in September 1939, the prototype was involved in a fatal landing accident where it turned over onto its back, killing the pilot Flt. Lt. G.S White. This revealed a flaw in the pilot’s harness and the installation was redesigned, saving many lives in the conflict that was to follow.

SPITFIRE Mk.I
From the first squadron deliveries to the Battle of Britain

The Spitfire had a long and illustrious career, having been the sole fighter aircraft in the allied inventory that had been in front line service from before the Second World War to the very end, and beyond that in secondary roles. The first model to see service was, naturally the Mk.1 which grew out of the prototype’s constant testing and development.

First orders and doubts
310 Spitfires were ordered in 1936, before the prototype had even flown. Initial production was rather disappointing as the Supermarine Works was already fully engaged in building flying boats for the RAF. It wasn’t until August 1938 that the first MK.1 Spitfires were delivered to 19 Squadron at RAF Duxford, the unit to carry the honour of being the first to operate them. Even then the Air Ministry proposed that the programme should be abandoned altogether. They were persuaded otherwise by the management at Supermarine, with a promise to get production moving at a proper rate. By involving other factories, from 1938 to 1939 2, 160 aircraft were ordered, making it one of the largest orders in RAF history.

At this stage, the early Mk1s were powered by the Merlin II which produced 1,030 horsepower, with a fixed pitch, two-bladed propeller that allowed a maximum speed of 362mph and a maximum height of 31,900 feet. An external electric starter cart was required. A three bladed, two position propeller was fitted from the 78th aircraft onwards and later, a blown sided canopy replaced the early flat type, improving the pilot’s field of view, including, crucially, the view to the rear.

A major issue at higher altitudes, was the constant freezing of the guns due to condensation. Heating was installed early in the production run, which made the problem less common, warm air loss was minimised by covering the gun apertures with fabric patches that also prevented ingestion of dirt and debris. Fabric was also used to cover the rudder, elevator and initially, the ailerons, which later gained an aluminium skin instead, a feature not made standard until 1941.

Adding armour
Initially, the aircraft and its pilot were rather vulnerable even to small arms fire and shrapnel. Later in 1939, an armoured windscreen was added, giving much-needed protection for the pilot and a thicker aluminium cover for the fuel tank area immediately in front of the cockpit. The lower fuel tank itself was given a self-sealing rubber coating. From mid-1940 steel armour plate was added to further protect pilots. A quick-release canopy system was added to aid bailing out.

The two pitch propellers were converted to constant speed units, which improved the climb rate – a crucial advantage in an aerial battle, while also shortening the take off run at the cost of a slightly lower top speed. The availability of 100 octane petrol allowed the lost speed to be
regained for short periods, by advancing the throttle into emergency boost, breaking a wire guard that prevented accidental use and alerting the ground crew that this fact had to be entered in the engine’s logbook.

Outgunned
The Spitfire was on the face of it, outgunned by the Bf109 with its 20mm cannon armament. To remedy this, a number of Mk1 Spitfires were fitted with Hispano 20mm cannons themselves. Jamming was a problem and some pilots such as Douglas Bader refused to use Spitfires thus equipped, preferring the standard fit of 8 .303 machine guns. With the choice of armament, a new designation was made between them, the cannon version being the Mk1b and the original machine gun version being redesignated MK1a. The best mix was eventually proved as being two cannon and four machine guns.

Relative merits
In combat, the Spitfire had a serious issue. If required to make a negative G manoeuvre such as diving away, the engine would stutter due to the floattype carburettor becoming flooded, while the Bf109, with its fuel-injected engine, could dive away without loss of power. A Spitfire pilot in this situation had to roll the aeroplane on its back and pull to maintain positive G, losing time and temporarily losing sight of the enemy behind his nose. Both had their relative merits, the Spitfire could turn tighter, while the 109 had a better climb rate, but only a marginal difference existed. The outcome of an engagement often depended more on who saw the opponent first and had the element of surprise on their side than any technical aspects.

Spitfires with cameras
Reconnaissance versions of the Mk1 were created to exploit the small size and high speed of the aeroplane, to avoid interception that larger aircraft could easily suffer. In the conversion, all armament was removed, along with the radio equipment. The external finish was rubbed down, gun ports and panel lines filled to reduce drag and painted pale blue with a high gloss finish. These measures contributed to a top speed of 390mph for the MK 1 PR Type A. Provision was made for two cameras to be fitted with a heating system to prevent them freezing in cold conditions at high altitude.

Later versions had upgraded cameras and range was extended by increasing the fuel capacity, while the Merlin engine was upgraded to the Merlin XII. Armoured windscreens were removed and blown canopies were fitted with streamlined ‘blisters’ protruding from the sides that allowed better downward vision for the pilot.

Very long-range versions were produced by converting the wing leading edge ‘D-box’ structure to hold additional fuel. Aircraft so equipped were able to fly photo reconnaissance missions as far as Marseilles and Toulon.

Production of the Mk1 Spitfire carried on after the Battle of Britain into 1941, with a total run of 1,517 aircraft. 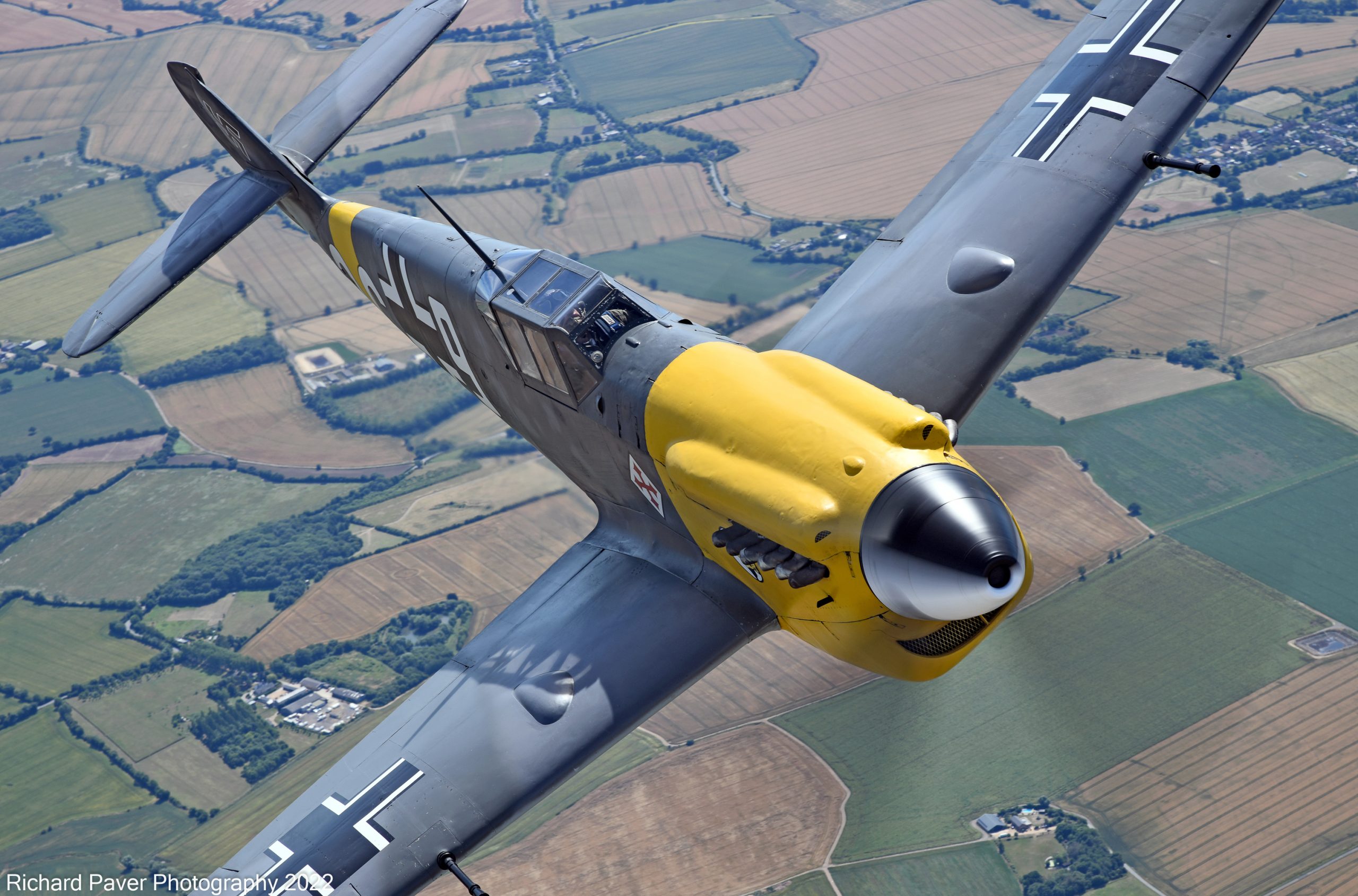 The expanding range of warbirds based at the Biggin Hill Spitfire Factory grows again for 2023 with the acquisition of the Hispano HA-1112-M1L Buchon ‘White 9’ .

Powered by a Rolls Royce Merlin 500/45 instead of the Daimler Benz 605 found in the Messerschmitt manufactured 109 this aircraft served with the Spanish Air Force from 1958 to 1965.

The aircraft carries the colour scheme of ‘White 9’ ME109 flown by UFFZ Edmund Roβmann who flew with the Jadgeschwader 52 (Fighter wing) in the Battle of Britain before transferring to Russia.

The aircraft flew in the classic movie ‘Battle of Britain’ before being sold and stored in the USA. Returning to the UK its first post restoration flight took place in June 2018.
The aircraft will join the unique collection of WWII era aircraft based at Biggin Hill and ‘White 9 ‘ is expected to be available to accompany 2023 Two Seat Spitfire flights for formation tailchase experiences.

A Spitfire and ‘109’ pursuing each other over the fields of Kent will be an emotive sight.

Spitfire and ‘109’ Tailchase Experiences will be available at flyaspitfire.com soon.