Why Fly a Spitfire at Biggin hill?

The most famous RAF fighter station

Spitfires at Biggin Hill – The name ‘Biggin Hill’ is synonymous with the Battle of Britain, when a small band of fighter pilots stood alone against the might of the Luftwaffe, a fighting force greater in number and already proven in combat.

From this hallowed ground, young men, with little experience and only basic training, took off to engage this enemy, with the fate of western civilisation resting on their shoulders. Through sheer determination, they prevailed, as pilot Geoffrey Wellum simply put it: “we beat them.”

Long before those dark days there had been flying from this plateau at the top of the North Downs. In 1917 the Royal Flying Corps based its Bristol Fighters on ‘the bump’ to defend London from bombing by Gotha bombers and Zeppelin airships.

Hurricanes arrived before the Second World War started and the station’s first ‘kill’ came soon after hostilities began on 2nd November 1939 when a Dornier Do17 was destroyed. Spitfires began arriving by the start of the Battle of Britain and soon, the Luftwaffe turned its attention on putting the airfield out of commission. Between 1940 and 1941, the station was bombed 12 times, but despite direct hits on the Operations block and many other areas, it was never actually closed. During WW2, the Biggin Hill sector was the first to claim 1000 victories over enemy aircraft. By the end of the war the tally reached over 1400.

After the war, Spitfires continued to fly from Biggin with the RAF Auxilliary Air Force, transitioning to Meteor and later Hunter jets and operating up until 1957 when the Auxilliary squadrons were disbanded and the Officer and Aircrew Selection Centre became the sole remaining RAF presence until it too left in 1992.

Today, Biggin Hill is a busy airport for business aviation but the ‘jewel in Biggin Hill’s crown’ is undoubtedly the Biggin Hill Heritage Hangar, where visitors can take a tour of the world’s largest Spitfire restoration facility, plus for the more adventurous, there is the chance to fly in a Spitfire and take the controls.

Of course, there are other locations in the world where Spitfire flights are possible, but when you take into account Biggin Hill’s links with the Spitfire and its central role in the Battle of Britain, flying from anywhere else is surely a much lesser experience. Nothing compares with coming back into to Biggin in a ‘Spit’.

The combination of the Spitfire and Biggin Hill multiplies the meaning of the experience.
It’s the closest you’ll ever get to being a Battle of Britain Spitfire fighter pilot.

Fly from RAF Biggin Hill the most famous Battle of Britain fighter base and walk in the footsteps of those brave young men who fought from here in 1939-1945.

See one of our flights in action

“Wow what a fantastic experience, so well organised and all the staff so friendly and helpful.”

“Brilliant is an understatement! I had the most wonderful time! It was always a dream of mine to fly in the iconic Spitfire and the reality didn't disappoint!” 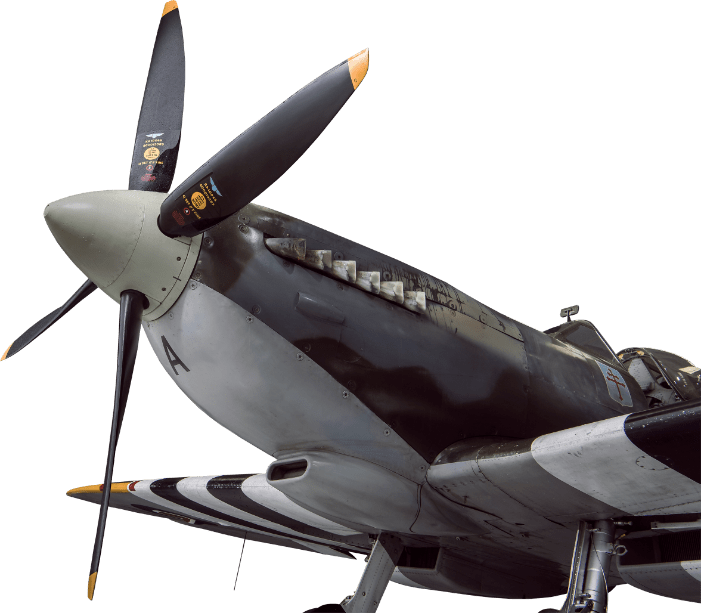 We're focused on providing the flight of a lifetime. See previous guest reviews on Tripadvisor, Truspilot, Google and Facebook.