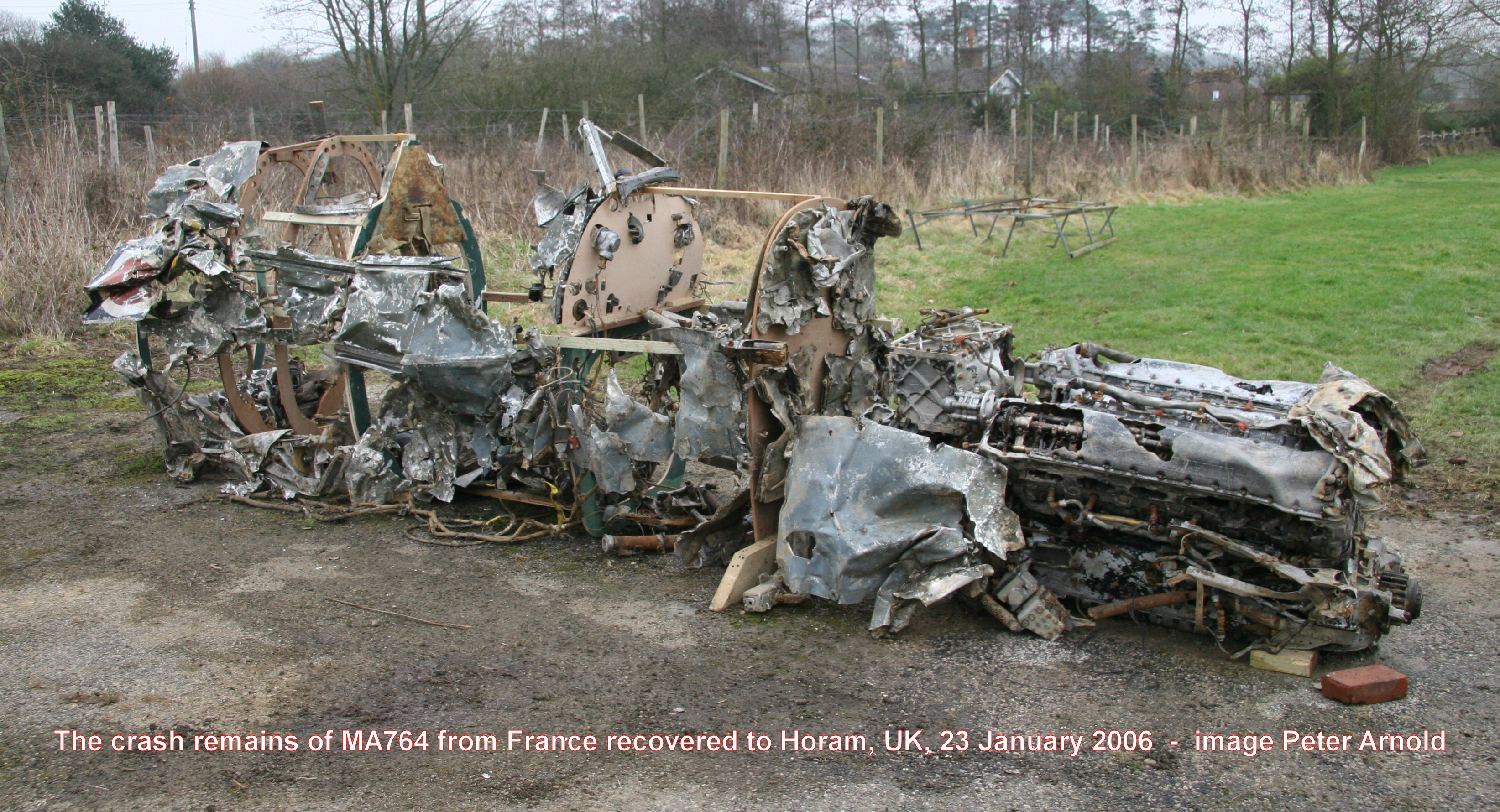 Posted at 10:33h in Uncategorized by Spitfire_BHHH

Number three in the important restorations planned for 2021 is Spitfire IX MA764. Rolled out from Castle Bromwich in early 1943 being one of a total build of 650 with a serial number between LZ807 and MA906, it was fitted with a Rolls-Royce Merlin 63 engine. On the 24th July 1943 it was issued to No. 33 Maintenance Unit (MU) at RAF Lyneham in Wiltshire prior to being allocated to No. 122 (Bombay) Squadron then based at the Advanced Landing Ground (ALG) at Brenzett on the Romney Marsh in Kent. Arriving on the 10th August the squadron was part of the 2nd Tactical Air Force tasked with ground attack and bomber escort missions. 1943 was a year of frequent moves by the squadrons and 122 Squadron was no exception when it moved to the Kingsnorth ALG on 16th September followed by another move to Ashford ALG three weeks later. After a brief sojourn at Weston Zoyland, the squadron and MA764 moved to a more permanent base at RAF Gravesend in Kent.

On the afternoon of 25th November 1943 the squadron was tasked with RAMROD 333, an escort sortie to a force of bombers attacking ground targets near Lille in France. With the bombers having completed their task, the formation was turning for home when they saw several other aircraft a distance away. Assuming them to be part of the bomber escort they flew towards them. At the same time the distant aircraft turned to be heading towards them as well and it was only when they were within a mile or so of each other that both realised that they were opposing sides. This resulted in a dogfight with several Bf109’s which culminated in Flight Sergeant D Bostock flying MA764 calling up to say his engine was registering high glycol temperature and he was going to attempt to land. Nothing further was heard and it was assumed that the Spitfire had crashed and that he had died in the impact. In fact he had bailed out and evaded capture by the enemy to be later taken in hand by the French Resistance who aided his eventual return to the UK via Spain and Gibraltar. Within four weeks he was back with his squadron.

MA764 lay in French soil till recovered by an aviation group. At some period during the operation a helmet was discovered with the initials DB on one side. This provoked the thought that the crash site was that of Douglas Bader. After further research however it was discovered it was that of Flight Sergeant D Bostock. At the conclusion of the recovery the aircraft was returned to Horam in East Sussex on January 26 2006 where it was re-assembled to allow an inspection. Acquired by Peter Monk and his Spitfire Company (Biggin Hill) Ltd, MA764 then came into the ownership of Mark Collenette who commenced the restoration of the fuselage before it was moved to the heritage hangar in early February 2021 for a full restoration to flight over the coming year.

This website uses cookies to improve your experience while you navigate through the website. Out of these cookies, the cookies that are categorized as necessary are stored on your browser as they are essential for the working of basic functionalities of the website. We also use third-party cookies that help us analyze and understand how you use this website. These cookies will be stored in your browser only with your consent. You also have the option to opt-out of these cookies. But opting out of some of these cookies may have an effect on your browsing experience.
Necessary Always Enabled
Necessary cookies are absolutely essential for the website to function properly. This category only includes cookies that ensures basic functionalities and security features of the website. These cookies do not store any personal information.
Non-necessary
Any cookies that may not be particularly necessary for the website to function and is used specifically to collect user personal data via analytics, ads, other embedded contents are termed as non-necessary cookies. It is mandatory to procure user consent prior to running these cookies on your website.
SAVE & ACCEPT