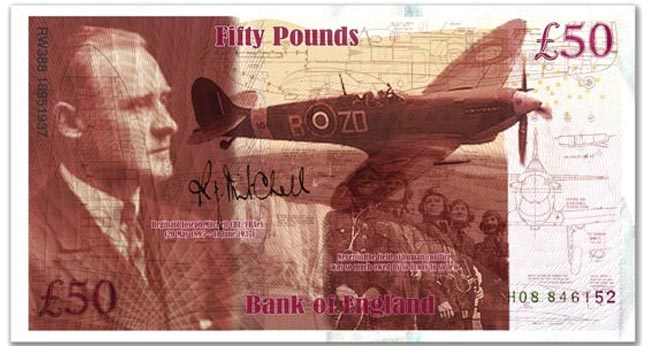 From 2020, a new polymer £50 note will begin to circulate throughout Britain for the first time. This new ‘plastic’ note is being introduced to prevent fraud, be more durable and more secure. However, the question on everyone’s lips is: who’s face will be on the back of the new banknote?

This decision has been left to the public and it has sparked hundreds of discussions and petitions from thousands of people all over Britain who each want to have their say.

The petition we are supporting is the one to honour Reginald Joseph Mitchell CBE, FRAeS with the coveted position.

R.J. Mitchell was one of Britain’s most outstanding engineers and designers during the interwar period. While designing many ground-breaking aircraft, he is best remembered for his racing seaplanes and the iconic Second World War fighter, the Supermarine Spitfire.

Tragically, Mitchell died of cancer before World War II, before he could see witness the success of his creation, and how the aircraft he designed became a symbol of the allied stand against the Nazis in the Battle of Britain and went on to help win the war.

The design of the Supermarine Spitfire came from Mitchell’s many years of hard work, dedication and determination. Throughout the service life of the aircraft, there were hundreds of adaptations and redesigns and without the conception and production of this magnificent aircraft, we could be all living very different lives today.

The Spitfire changed the course of British history and we feel R.J. Mitchell truly deserves to be celebrated among the greats. What better way to do so than on the new £50 note?