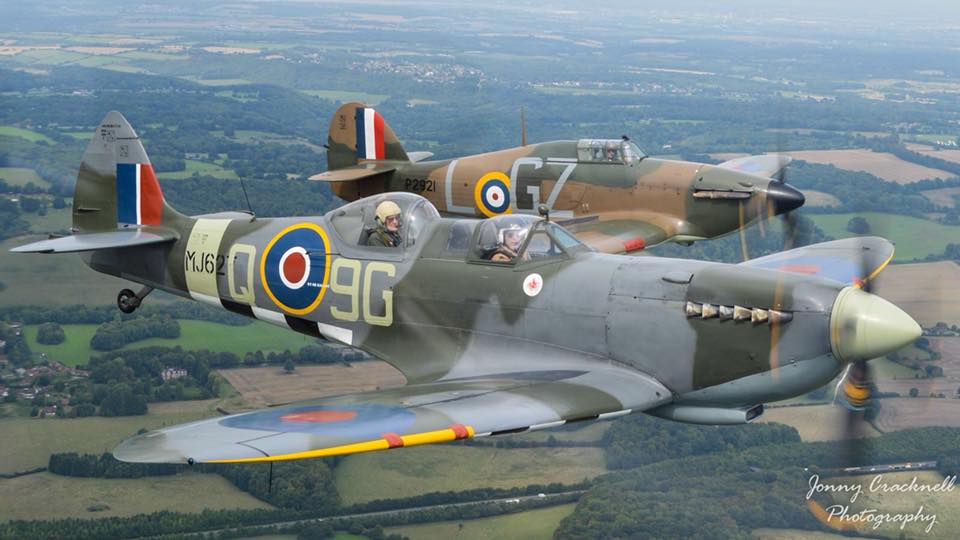 On 5th September at Biggin Hill, 99-year-old World War Two Hurricane pilot Archie McInnes, took to the skies of Kent once again with Sqn Ldr ‘Smithy’ Smith, who commanded the Battle of Britain Memorial Flight from 2009-2012.

Smithy is currently the RAF Typhoon Display Team Supervisor, but spends his spare time flying the Biggin Hill Heritage Hangar Spitfires and Hurricanes. As a special honour for a man of Archie’s calibre, as well as a trip in the Fly A Spitfire two seater, MJ627, the BHHH Hurricane was also sent up to up fly in formation so that Archie could see his old faithful aircraft at his side.

Archie was a Hurricane pilot on 601 Sqn during the Battle of Britain and then went on to fly with 238 Sqn in the defence of Malta and then Egypt where he was shot down, losing his left arm in the process. He went back to flying Hurricanes with a prosthetic arm of his own design, which was specially made to be able to operate the aircraft’s throttle.

Although predominately a Hurricane pilot in period, Archie has a few hours on Spitfires logged in 1941, and was happy to perform a few victory rolls before returning back to Biggin Hill.

After the flight, Archie commented: “It really does bring back memories of a time when I COULD fly!”

At at time when we have sadly lost a number of our veterans, it was a real honour to be able to send Archie back into the air with his two favourite fighters and show him the esteem in which our ‘Greatest Generation’ is held in these parts.

You can book your own Spitfire adventure here.